Is e-waste a threat or an opportunity for small-island economies to transition to a circular economy?

Electronic waste is considered a global ecological issue as well as a valuable source of materials by an immense body of research. Various concerns have been raised about e-waste, including air, water, and soil pollutions, geopolitical supply risk of metals, planned and perceived obsolescence, information security, and human exploitation. These concerns are accentuated in specific geographic areas, such as small islands, due to their unique characteristics.

During my Master's, I approached e-waste from the perspective of a small island, a previously underexplored research area. In Small Island Developing States, with bounded systems and limited land and resource availabilities, e-waste is a growing concern. These small economies import a vast majority of their required resources, which eventually end up as waste on islands, implying a one-way material flow. Managing e-waste is complex for these nations due to various reasons, including collection, transportation, and processing challenges, all of which are exacerbated by insufficient regulations and investments. E-waste mismanagement causes a drop in environmental quality, biodiversity loss, and a decrease in a natural population. Exporting end-of-life products to other countries is costly. However, material reuse could result in significant revenues as we show in our two publications.

Focusing on five Caribbean Island States (Aruba, Barbados, Grenada, Jamaica, and Trinidad and Tobago), our two published papers provided the first view of e-waste generation trends in an island context and explored the potential for a circular economy. In our first paper, we estimated Electrical and Electronic Equipment flows, as well as e-waste generation patterns over a period of 60 years (1965-2025) using MATLAB. A dynamic material flow analysis (MFA) was used to estimate the flows and stocks for 206 product types. Surprisingly, the results show that four out of five Caribbean islands generate significantly higher e-waste amounts compared to the global averages (e.g., 7.3 kg/cap/year in 2019). For instance, Aruba, with around 106,766 residents, is estimated to have the highest e-waste generation rate (30 kg per capita) in 2025 among the five cases. The total amount of e-waste produced shows a surge from 27,500 tonnes in 2010 to an estimated mass of 59,000 tonnes in 2025.

Higher living standards in affluent countries, such as Aruba, result in the generation of more e-waste, but the annual growth rate declines year after year. The slowing rate of generation is due to approaching saturation volume, and it may transform, for example, if new technologies are introduced to these markets. The high rate of e-waste generation relative to the small size of islands and their limited capacities suggests that urgent attention needs to be given to proper e-waste management in terms of infrastructure, laws, and regulations. 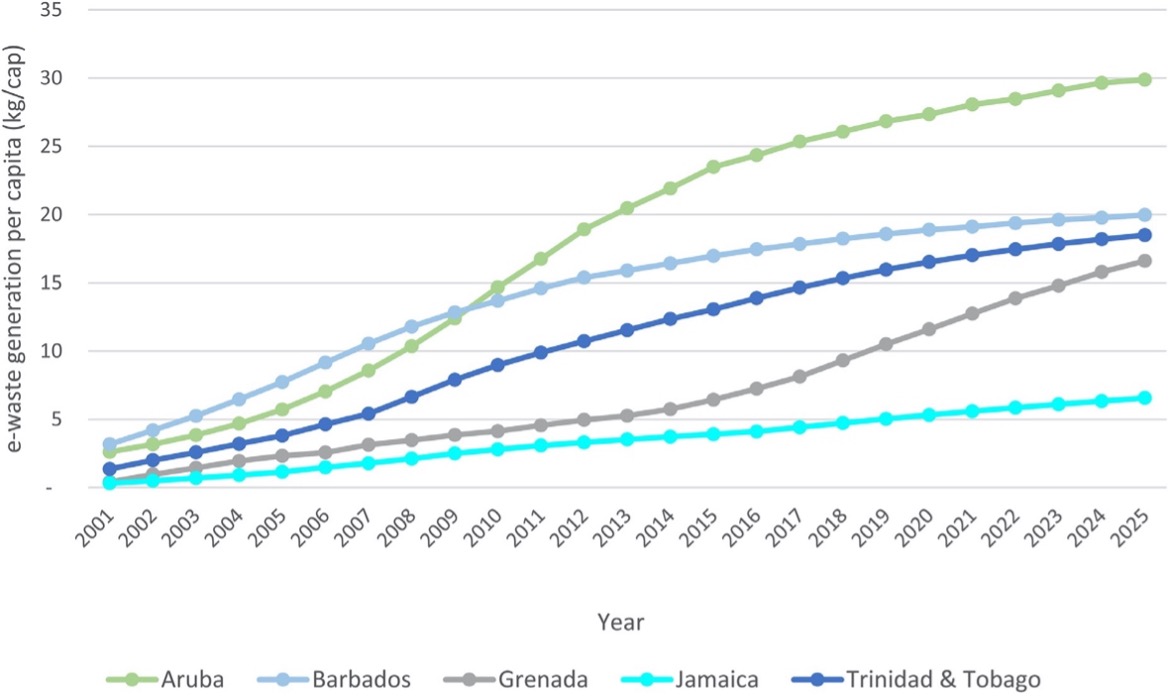 The upward trend is estimated in the annual e-waste generation rate for all five islands. The graph is from our published work.

In our second paper, the quantity of secondary resources within e-waste and the economic value of the embedded materials were estimated. We evaluated the potential of a circular economy and questioned whether a circular economy could be a promising solution for islands to address their e-waste problem. An analysis of the economics of e-waste was undertaken to examine the viability of a CE. The analysis considered the economic value of embedded materials for five material types: base metals, precious metals, plastics, glass, and other materials. The results depicted that recycling and converting the generated e-waste (between 2020 and 2025) into secondary resources would fetch the five islands $546 million (with an average economic value of $1.72 million for each kilo tonne of material). Around 40% of this value is estimated to come from Gold (Au), which is mainly contained in small IT and telecommunication equipment, small equipment, and screens and monitors.

To analyze the status of CE for e-waste, we conducted interviews with waste management experts in the target islands. According to these interviewees, there were no particular national practices devoted to achieving the CE of e-waste on the five islands at the time of the study. All experts mentioned that there is minimal awareness about CE practices for proper e-waste management. Disaggregation and exportation of a limited number of commodities or components (mostly computer components, basic metals, and plastics) to other countries are some of the practices adopted by the private sector. Product repair, refurbishment, or upgrade efforts are considerably limited. The shortage and high cost of spare parts are limiting the variety of items that can be repaired. Also, people typically choose cheaper devices with a shorter lifespan because the market price of electrical and electronic products on islands is significantly higher than on the mainland due to shipping fees and taxes. It is a surprising reality that it would be cost-effective for islanders to travel to the United States to purchase some items rather than purchasing them on the island.

Considering various challenges that small islands face for proper e-waste management, and the importance of the Caribbean as one of the biodiversity hotspots, our research suggests that circularity thinking needs to be embedded in future scholarship and policy. Due to economies of scale that limit smaller nations, regional co-operations and initiating industrial symbiosis would be essential to shift to a CE. Suppose this significant e-waste volume is not properly managed; in that case, it will not only be detrimental to the local ecosystem but also a drain on scarce global resources. 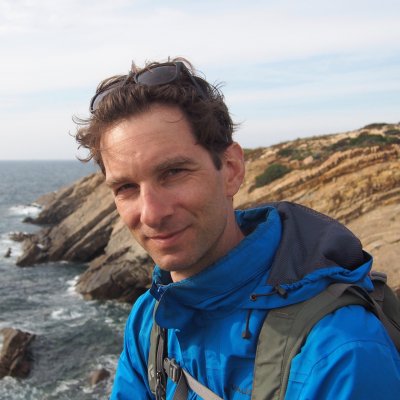