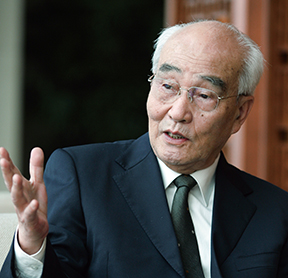 On November 27, 2017, China's industrial ecology community lost their academic leader, Lu Zhongwu. Mr. Lu was born in 1929 and started his academic career working on energy conservation for a kiln. After focusing on reducing energy and material use in industrial systems, Mr. Lu decided to dedicate himself to industrial ecology in his 70s, demonstrating his commitment to greening industrial China and contributing insights about pollution prevention both from the perspective of sources and overall systems.

Mr. Lu was one of the earliest and most determined practitioners and leaders in industrial ecology in China. He was devoted to introducing the voice of China and mathematic rigor to industrial ecology. In the late 1990s, based on the fact that China's scrap resources were in serious short supply, he conducted a quantitative study on the impact of changes in steel output on resource and environmental efficiency. He pointed out, among other insights, that the country should not blindly construct electric furnaces. At the beginning of the new century, Mr. Lu proposed a theory of crossing the "environment mountain"-- quantifying the relationship between the growth rate of GDP and the declining rate of environmental impact per unit GDP, and clarifying the dialectical relationship between environment and development in a systematic way. After that, he proposed a "tracing observation method" for material flow analysis, developed the "macro-level control network for basic materials industries", and quantitatively analyzed the substance flow for various metal elements, including iron, copper, aluminum, lead and zinc. All of this research provided essential policy insights for China's basic materials industry.

Mr. Lu always paid attention to and studied the fundamental, strategic issues in China's development. In the words of Professor Qian Yi, a colleague and fellow pioneer in industrial ecology, “His actions have made tremendous contributions to China and as a man he is even more admirable. The spirit of Mr. Lu is immortal!”

Mr. Lu Zhongwu was born in October 1929 in Shanghai. He studied in Chongqing Nankai Middle School from 1941 to 1946, graduated from the Department of Chemical Engineering of Datong University in 1950 (the first three years at Central University) and obtained a graduate degree in metallurgical furnace from the Northeastern Institute of Technology (Former Northeastern University) in 1953 (the first two years at Harbin Institute of Technology). He was promoted to Associate Professor in 1962 and to Professor in 1982, then he was appointed as the President of Northeastern Institute of Technology from 1984 to 1991. In 1997 he was elected as a fellow of the Chinese Academy of Engineering. He was previously a member of the Disciplinary Review Group of the Academic Degrees Committee at the State Council, a vice chairman of the China Metals Society, a member of the China Environmental Advisory Committee, and an expert for circular economy in the China Council for International Cooperation on Environment and Development. He was also on the Editorial Board of the Journal of Industrial Ecology and Resources, Conservation and Recycling. He published 15 books, including Industrial Ecology Foundation and Crossing the "Environment Mountains": Industrial Ecology Research as well as more than 220 papers. He received the second prize of the National Science and Technology Progress, Guanghua Project Science and Technology Award, Metallurgical Technology Lifetime Achievement Award, Ukraine Yaroslavl's Wisdom Award, as well as the national model of teachers, and outstanding expert of Liaoning Province.

In the Media: INITIATE EU Consortium of innovative industrial transformation of steel and chemical industries through industrial symbiosis